Genomics of speciation, hybridization, and conservation What are the first genes to change during the formation of new species? How do novel mating signals and behavior evolve? We seek to understand the genetic architecture of traits that create reproductive isolation among populations. We want to know how male and female preferences co-evolve and how multiple barrier traits become coupled together within the genome. Ongoing work uses the European corn borer moth (Ostrinia nubilalis) as a model. Populations of this sweet corn pest can vary in mating pheromone, pheromone preference (males and females), and timing of mating.

Our research also focuses on factors that determine hybridization rates among species and the maintenance or loss genetic diversity in threatened or declining species. Hybridization is a double-edged sword: beneficial for genetic diversity but it can lead to loss of species-species traits through genetic swamping. Ongoing conservation genetics projects include studying the genetic diversity and documenting extant subspecies of the Frosted Elfin butterfly, Callophrys irus.

Environmental and epigenetic effects on speciation 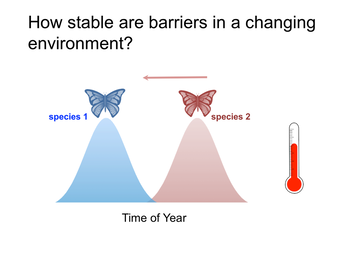 Other past research topics: